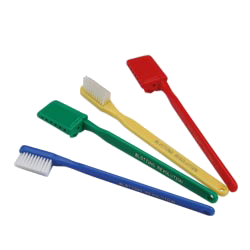 Developed during the 1960's by Dr. Joseph Phillips and remains as effective today as it was back then. The only difference is that thanks to the internet, more people around the world are able to benefit from it.

It is abundantly clear that Dr. Phillips was a man ahead of his time. Not happy with his patients returning again and again with poor gum conditions, he set about devising a method whereby he could help prevent their gums from deteriorating between appointments.

By chance he saw, during a film on African culture, members of the Masai tribe fray the end of a twig they picked from bushes in the wild, and used to clean their teeth. Rather than dismiss this as a primitive tribal habit, it set him thinking as to how he could harness this approach in his practice.

Upon further investigation he discovered this 'twig' to be from the Salvadora Persica (Mustard tree) and arranged for some to be sent to him. Using the same principle of the frayed end, Dr. Phillips developed the Blotting Brush using a frayed nylon bristle. His patients were then able to use the Blotting Brush between appointments and right away he noticed a reversal of their conditions. He then set about perfecting his Blotting Technique so that Blotting Brush users would get the best out of this method..

Dr. Joseph Phillips was a periodontist (a gum specialist) who taught each patient that gum disease, subsequent surgery and tooth loss were wholly unnecessary if the mouth was cared for properly. Dr. Phillips' extensive research was destroyed in a fire after his death. Therefore without access to his valuable papers and records, this book can only be treated as anecdotal.

Even after retiring from active practice, he lectured tirelessly in the USA and internationally to promote 'teeth for a lifetime'. His Blotting Technique goes beyond the traditional brushing and flossing routine to give you 'a new standard of clean' that promotes the health of your teeth and gums. It's simple and inexpensive making this simple technique understandable and affordable for everyone.

These brushes contain special bristles that are not found in normal toothbrushes. The bristles are especially textured to enhance their capillary action to suck up dental plaque that is associated with gum disease. The brushes also have rounded and polished bristle tips so that they are extra gentle on your gums. The brushes come in assorted colors.

How long can a person with gum disease expect to keep their teeth?
The chances are usually very good that the gums can be healed. Once the gums are healthy and maintained properly using the Phillips Blotting Technique, there should be no reason for losing teeth. Teeth are meant to last a lifetime, and this can almost always be accomplished.

Are all gum diseases curable?
99% of gum diseases are curable using the Phillips Blotting Technique. Desquamative gingivitis, a common gum disease is incurable, but its symptoms can be greatly reduced by achieving a thoroughly clean mouth.

How often should I clean my mouth?
If your gums are infected, you should be cleaning your mouth two to four times a day. Once the gums are healthy, cleaning the mouth (Blotting crevices and cleaning the rest of the mouth) twice a day will maintain good oral hygiene.

How much time should I spend?
For the technique to be effective, you need to spend about six minutes per session Blotting the crevices around the teeth. But since the mouth can never be too clean, you can never Blot too much.

What assurance do I have that this technique will work?
People have been using this technique for over 50 years without getting a cavity or gingival disease. Many of these people had serious dental problems before using the technique. Even elderly patients who had never even brushed their teeth have been able to keep their remaining teeth and avoid surgery using the Phillips Blotting Technique. Only in cases of severe systemic blood diseases has the Blotting Method not worked.

How long will I have to continue Blotting?
Hopefully Blotting and total mouth hygiene will become a lifelong habit. You can enjoy fresh breath, a clean mouth, free of cavities and gum disease, if the Phillips Blotting Technique is done properly over a lifetime.

Do I still need to floss?
You can gently floss with the bristles of the Blotting Brush or use a regular flossing tape.
“My sincere belief is that a dentist can keep your teeth for you only by teaching you to help yourself."
Dr. J.E. Phillips